“Around one in three cars will be electric”
Shares in this tiny company could double thanks to this ‘backdoor’ opportunity in a sector expected to grow 400 times in 2 decades!
Dear reader, 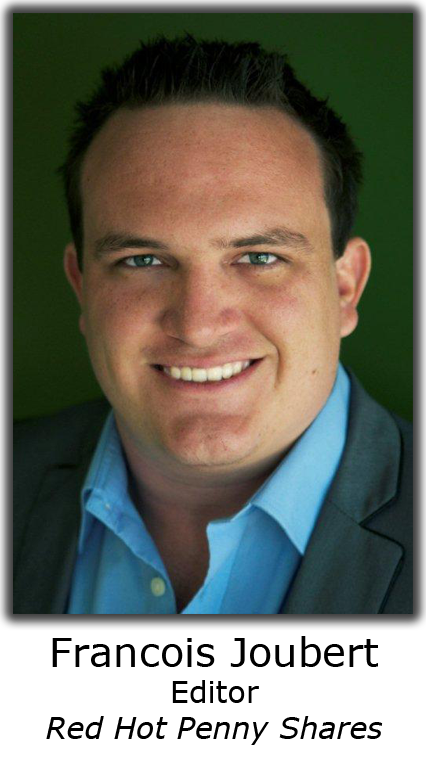 Imagine you could leave your house and step into your car to go somewhere…
Just a normal activity right?
But in this case, you don’t take control of the wheel.
Instead, you punch a destination into the navigation system and your car moves off by itself.
It detects traffic lights and road signs. It senses road markings and edges. Your car can avoid accidents all by itself.
As you roll along you can read emails, the news and make calls.
You could even take a quick nap!
Best of all, the whole journey is powered by electricity, not petrol. So, there’s no toxic fumes following you.
And when your car is low on energy, you can pull over and recharge it within minutes. Sounds like something from a science fiction movie.
But it’s rapidly becoming reality.
Driverless cars will be for sale to the public within two years from now.
Ordinary people like you and I could own one within the next ten years.
And if it’s not driverless, chances are it’ll at least be electric.
According to the MIT Technology Review: “Electric vehicles will become a more economical option than internal combustion cars in most countries in the next decade.”
And Bloomberg New Energy Finance says that ‘around one in three cars in the world will be electric by 2040’.
Currently there are roughly a million electric cars in the world, compared to 1.2 billion cars in total. That means, for electric cars to reach the one in three mark they will grow from the current million to 400 million.
That is 400 times growth!
Simply put, the electric car market is at the precipice of truly MASSIVE growth.

In this month's issue of Red Hot Penny Shares, out on the 19th of January, I’ll give you all the details and tell you where to put your money to make use of this rare opportunity…

In this issue you’ll also discover:

And this is just the start

With your order, you’ll also IMMEDIATELY receive FOUR FREE BONUS GIFTS to help you get started in the exciting world of penny share investing right now. These include:

Combined, these gifts have a total value of R1,551

But again, they’re yours at no cost when you claim your 100% risk-free trial copy of 'Double your Money' Stock Play Book for 2018.
With each report, you’ll get the full benefit of my latest research into which shares to buy right now for double and even triple digit gains within the next 12 months..


And Everything is 100% Satisfaction Guaranteed! 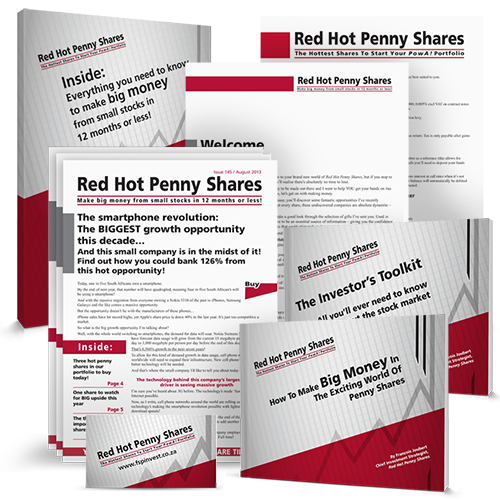 If you don't like what you see during the first 90 days — for whatever reason — you can simply contact our Customer Service team and we will issue you with a full refund of your subscription cost.
And we even slashed the price for you.
Instead of paying R106 a month for Red Hot Penny Shares, you can get a one-month subscription for only R69.
Red Hot Penny Shares also has a members-only website that contains an archive of each past issue as well as a library of bonus reports.
So, for the next 3 months you can browse them all and gain the type of insight and actionable steps necessary to guide you to boost your wealth and start profiting from the stocks.
If at any time during the 3 months, for any reason whatsoever, you decide this publication is not right for you, simply call, email, write, or fax us…
You will be refunded every cent of your subscription cost
It doesn't get any simpler than that. No pressure — no gimmicks — no strings attached.
Your Entire Package Includes:
Total Value R1,869
You Only Pay R69!
(And it's backed by our 100% Satisfaction
Guarantee for the next 90 days!)
LOWEST PRICE GUARANTEE: When you subscribe, your account will be billed based on the option you choose. When your monthly subscription is up, we’ll automatically extend your subscription and bill your account at the low renewal rate of R69. You lock in the lowest possible price and guarantee that you never miss an issue. You can cancel this "auto-renew" feature at any time during your subscription term.
There’s absolutely no obligation when you join. You can cancel at any time.
It’s time to grow your wealth today – let me help you.
Here's to unleashing real value,
Francois Joubert
Penny Share Analyst
P.S. I'm so convinced that you can fast track your wealth with Penny Shares that I'm offering you the opportunity to test run my service for 90 days absolutely risk-free... If you're not happy, I'll give you a full refund of your subscription fees.

Yes! I’d like to claim my FREE copy of the 5 Hottest Shares to Start Your Million Rand Portfolio with my RISK-FREE trial subscription of Red Hot Penny Shares.
Contact Us | Privacy Policy | Our Products | About Us | Disclaimer

Disclaimer
Copyright © 2021, Fleet Street Publications (Pty) Ltd.
The information contained herein is obtained from sources believed to be reliable, but its accuracy cannot be guaranteed. No action or inaction should be taken based solely on the contents of this publication. We do research all our recommendations and articles thoroughly, but we disclaim all liability for any inaccuracies or omissions found in this publication. No part of this publication may be reproduced or transmitted in any form or by means of electronic or mechanical, including recording , photocopying, or via a computerised or electric storage or retrieval system without permission granted in writing from the publishers.